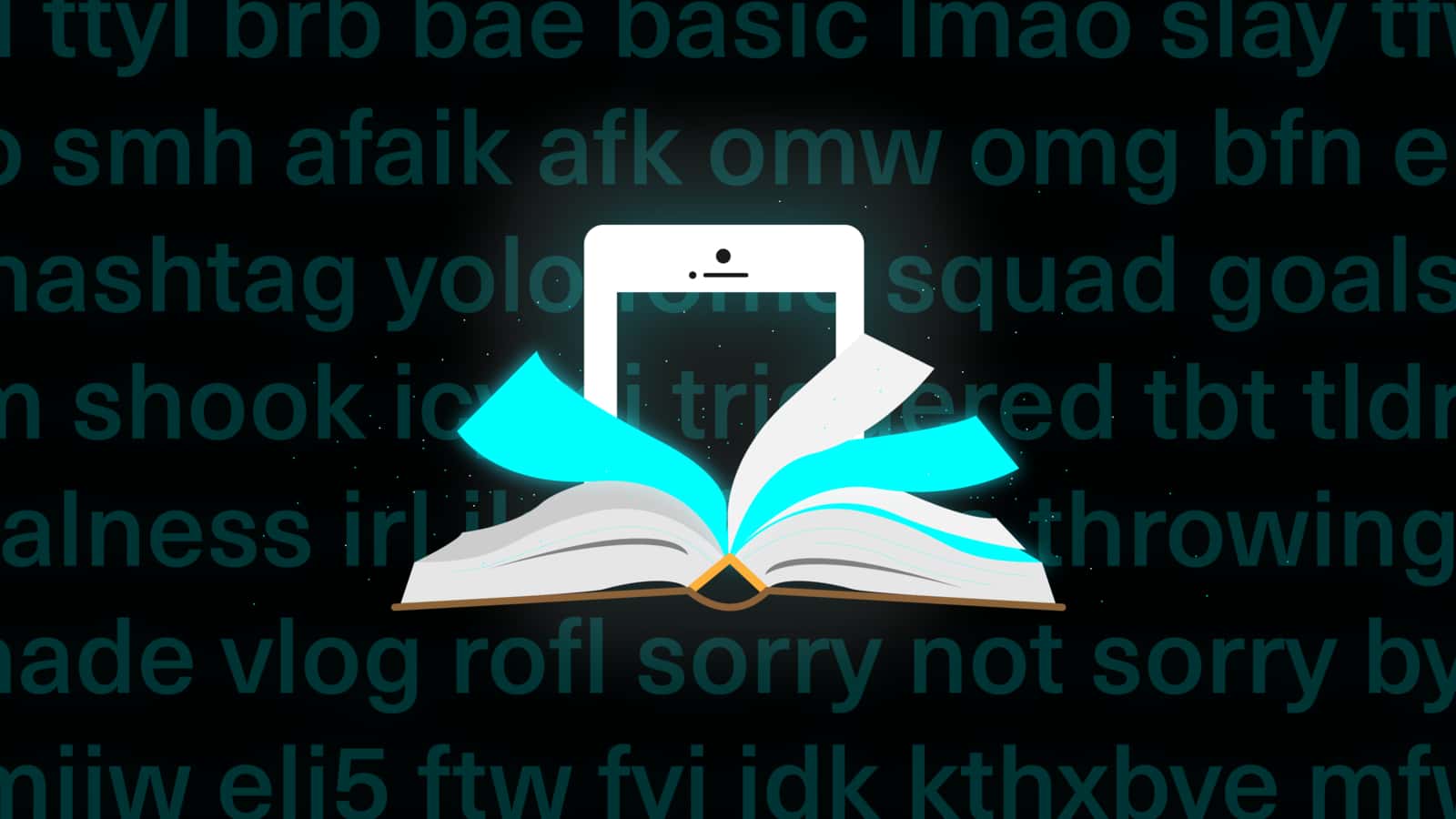 Tongue in tweet: how social media is changing language

One of the first essays I wrote at university – in the heady days of the early 2000s – was a study of the differences between email and letter writing styles. It all hinged on the shift to a more flexible, informal approach. It seems quaint to think about it, now that many of us spend more time bashing out social media posts and instant messages than we do crafting thoughtful emails. (And remind me, what is a letter?)

We’re seeing the influence of all this time spent communicating online on the way we write, speak – and even think. Traditionalists everywhere wring their hands over the way this relatively new and anarchic medium is destroying language (English, specifically), promoting sloppy grammar and producing a generation of mindless drones who can only communicate in buzzwords, emojis and hashtags.

But I think social media is rich territory for word nerds – a virtual playground where we’re all experimenting with and subverting language, consciously or otherwise. Far from reducing our ability to express ourselves, its various etiquettes and restrictions – not to mention the tribes that rule it – force us to be more creative than ever with our thoughts.

The first online forums – chugging away on dial-up internet – and popular mobile phones – with their itty-bitty screens and brutal word limits – ushered in a world of abbreviations and shorthand, largely to save us time, thumb-pain and extortionate pay-as-you-go charges when chatting. Much of this early text-speak is now obsolete or devoid of meaning. We can hammer out epic messages on our glistening smartphone screens, aided by autocomplete and instant spellchecker functions. But Twitter’s 140-word limit reins us back in, providing fertile ground for fresh abbreviations and acronyms.

And it’s not just the shorthand. Facebook and other platforms have offered up new meanings for common words such as friend, like, status, troll, feed and profile, which we now accept without question. As Oxford Dictionaries – who, let’s not forget, designated an emoji its 2015 Word of the Year – puts it, “An alphabet soup of acronyms, abbreviations, and neologisms has grown up around technologically mediated communication to help us be understood.”

But what’s more interesting is the way this tricksy new language has seeped out of our smartphone screens and infiltrated our day-to-day writing, speech – hell, even our thoughts. IRL, YOLO, TBH and BFF pop up in emails and conversations where they have no real reason to be – and who hasn’t threatened to “unfriend” someone in real life or “hashtag” a spoken comment?

We spend so much time communicating online that space-saving turns of phrase are now mainstream IRL, if uttered with a healthy dollop of irony, as this blogger points out: “If I say something like ‘OMG, WTF, why did my ex like my status, obvi I’m unfriending him,’ most people would know what I’m talking about (even if they’ll roll their eyes at how annoying I am)”. Justin Timberlake and Jimmy Fallon famously mocked the creep of Twitter-speak in this hashtag-saturated video.

Those who despair at a fall in spelling and grammar standards should look at it this way: we’re all writing more. Where writing was once a solitary or one-on-one pursuit, it has now become a social activity, and there are immense linguistic benefits. Social media forces us to be concise, informed and witty in our writing – or sink without a trace. As this writer points out: “These short, punchy, concentrated messages are changing the way we think… As an editor, I am glad the focus is on less is more.” Personally, a hard 140-character limit would come in really handy when negotiating copy changes with some of my clients.

And our linguistic horizons are widening. At the click of a button, we’re exposed to more cultures and dialects than our grandparents could have dreamed of. This is where it gets really fun for linguists. Social media is a melting pot of cultures and cliques that has let loose a whole new breed of slang beyond the technical terminology. Just look at the way elements of African-American Vernacular English (AAVE) have become standard terminology for anyone under 35 today: bae (boyfriend/girlfriend), woke (aware of political realities), squad (friends), slay (to succeed in something difficult) and basic (enjoying unsophisticated things) are all examples. English has always borrowed from other cultures and dialects, but the internet has turbo-charged the process.

New dialects have evolved to define different online sub-communities, too. Language that’s appropriate on Tumblr would look out of place on Reddit; abbreviations used on Mumsnet would be meaningless on Twitter. But none of this is new. Youth tribes and groups of friends have always defined themselves by their unique use of slang or jargon.

Neither is the despair about young people “dumbing down” anything new, as this blog summarises nicely: “Hand-wringing articles appear when people from outside that in-group try to understand it, but that was never the purpose for which that vocabulary developed.” Apparently US courts are using Urban Dictionary to help them understand young defendants, and one man is now making a living as an emoji translator. But old fuddy-duddies have always struggled to understand “the youth” – that’s the point. (At least these guys have Urban Dictionary.) Personally, I’m much more disturbed by the mindless jargon spouted by corporations than I am by the mysterious utterings of teenagers online.

Just as we have always adapted our speech and writing according to context, we should credit today’s social media addicts with having the confidence to switch between dialects and knowing the appropriate time and place for internet-speak and “proper” grammar. We would approach a client email differently to a message on a WhatsApp group between friends. Problems arise when these lines are breached. Some people do actually think it’s appropriate to respond to a carefully considered work email “thx :)”. And one of the many frustrations onlookers have with Donald Trump is his apparent strategy of rule-by-Twitter. Any fool knows that 140 characters is not appropriate for setting the entire presidential agenda. (There’s a whole other blog post in that.)

As the linguist David Crystal says : “When broadcasting arrived in the 1920s, we saw the arrival of all kinds of new styles, such as sports commentary and news-reading. Such things don’t seriously rearrange a language, whatever that might mean. They simply add new styles and extend the language’s expressive richness.”

Perhaps it’s easy for me to be optimistic. I’m a member of the awkward in-between generation, old enough to have grown up obsessed with books and letters instead of social media, but young enough to get it. Maybe my three-year-old daughter really will grow up only able to communicate with her friends in grunts and emojis.

But for now, let’s celebrate the inventiveness of internet-speak. Social media is changing language – and long may it continue to evolve.