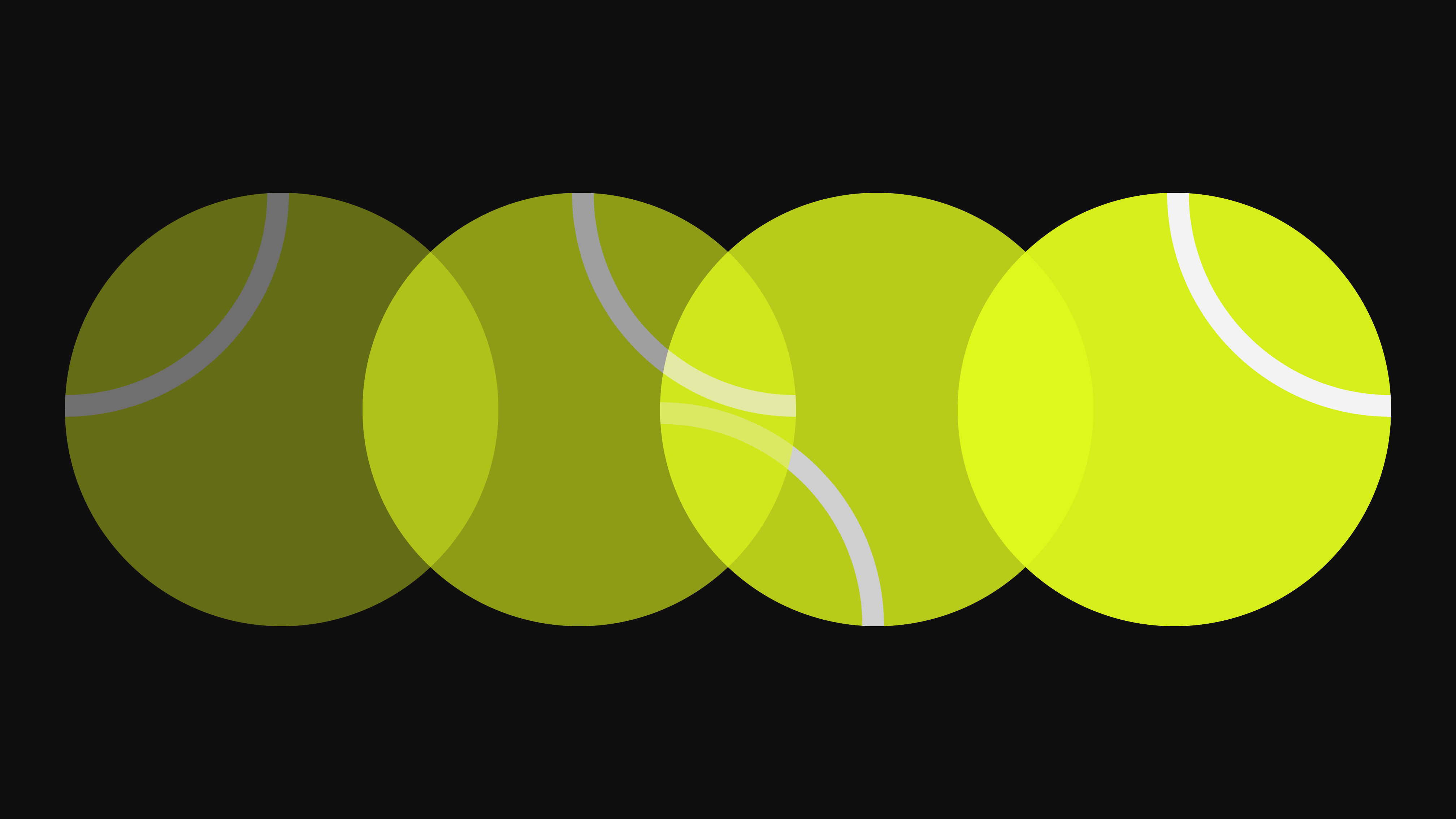 Match point: how we created an integrated campaign for Wimbledon and IBM in just two weeks

In the grand scheme of things, two weeks is a very short period of time. It can flash past in what feels like a second, leaving you scratching your head, wondering what you achieved or who you caught up with. But put your mind to it and you really can pack a lot in.

Take, for example, the two weeks of pure energy, excitement, action and emotion of Wimbledon every year. Well, nearly every year. In one of the many disappointments of 2020, the period that would usually be devoted to the world’s most prestigious tennis event had a question mark in its place. For only the third time in its history, Wimbledon had been cancelled, and, rather than simply sit to the side and admit defeat, the All England Lawn Tennis & Croquet Club (AELTC) and IBM were determined to find a way to celebrate Wimbledon – even with no live tennis.

The teams had devised an approach – The Greatest Championships – centred around sharing iconic Wimbledon matches remastered and reimagined for the modern, data-hungry fan. But they needed supporting content to highlight the role of their partnership in making this enormous pivot possible in such a short space of time. This is where we came in – and we had just two weeks of our own to deliver.

‍Phase one: Concept
We have been working with IBM and Wimbledon for many years, and always look forward to receiving our brief. Our task is invariably aimed at sharing the many triumphs of the partnership between the iconic brands via a campaign to coincide with the tournament. This year was the same – and yet so very, very different.

“On the face of it, it seemed like there wouldn’t be much of a story to tell,” says Creative Strategist, Maja Radosavljević. “In reality though, IBM’s role as a technological partner has proven to be more relevant than ever.” And because the services and innovation at the core of IBM and the AELTC’s partnership are in high demand from many other businesses right now, the timing couldn’t have been better.

This narrative, along with the rich tapestry of Wimbledon’s long history made up the bones of the campaign. Bringing them together flawlessly, though, particularly under current working conditions, was quite a challenge. “We had to talk about the history and the legacy, we had to talk about digital transformation, we had to talk about this year’s update because it’s monumental and will have far-reaching impacts on the future of sport,” says Creative Director, David Alexander. “So the scope of the story we were weaving together was enormous.”

In order to do the story justice, we knew we needed to hear from the people closest to the behind-the-scenes action from an IBM and AELTC perspective. We decided that a documentary-style video with their authentic voices would be the best way to share this story, and set about delivering just that as our hero asset.

‍Phase two: Production
Having settled on our format – an overarching campaign film that would be split into five shorter, shareable videos or “sets” – now it was time to make it happen. After identifying the IBM and AELTC team members closest to the heart of the Wimbledon story, we had to navigate the strictures of lockdown to film them.

Collaborating with long-time production partner Content is King, we managed to conduct Zoom-based recording sessions in as close to a studio conditions as possible.

“We decided to ship everyone identical high-spec webcams and microphones, having first tested several of the best on the market, and to have a set-up session with each interviewee at least a day ahead of their recording session to get everything looking good and running smoothly,” says Rob Martindill, Executive Creative Director of Content is King. “We sent each contributor a crib sheet containing guidance on things like optimal Zoom settings, where to place the camera and mike, and what sort of background we required. Then, we refined the settings, framing, and tweaked the available lighting so that our interviewees were lit evenly. We also ensured that everyone was framed consistently to allow for cropping to a 1:1 aspect ratio in post-production. Finally, a grade was applied to ensure consistency of brightness, contrast, colour and overall look. The contributors all did a great job in helping us achieve the quality and consistency required and can now add ‘camera operator’ and ‘lighting technician’ to their CVs!”

When it came to the interviews themselves, we had the unshakeable calm of director Trey Farley to help draw the gold to the surface. “I think the approach is still the same as a ‘live’ interview, but slightly adapted for remote filming,” says Trey. “For instance, for me, the first few minutes before the questions begin is always key. It’s the time to build a bridge, a connection to who you’re speaking to. In a way that’s a little easier interviewing someone in their home as there’s usually stuff in frame to chat about, whether it’s art on the walls, pets in the background or trophies on shelves.”

But it was the passion of the interviewees that really lit up the screen. “There’s something truly special about Wimbledon, and I could quickly sense that from both the AELTC interviewees as well as the IBM team working on the Wimbledon partnership,” says Trey. “In one of the interviews, someone said: ‘You don’t need to be a tennis fan to be a Wimbledon fan’, and it’s very true. I could definitely sense a level of pride from everyone who is lucky enough to be a part of such a prestigious and globally respected event.”

To tell the story visually, David was tasked with sifting through 31 years of Wimbledon history in the form of photography, videos, footage that had been recorded by team members, past websites, documentation and old team photos. It was a mammoth task, so David had to establish a kind of vast matrix that arranged potential usable assets into different buckets that aligned with the theme of the short-form “set” videos.

With interviews wrapped and our deadline looming, it was time to hand over to Content is King’s experienced editor Emma Rasmussen to bring all the pieces of the puzzle together. ‍

Phase three: Post-production
Emma had also been combing through the Wimbledon archive. “First, I needed to digest all of these assets to ensure I wasn’t overlooking any hidden gems, but then I had to rearrange them into themes and create a system that made logical sense to me so that I could quickly access what I wanted when I needed it,” says Emma.

After editing five hours of interview footage and B-roll, Emma was forming the skeleton of the films. “Getting the transcripts of the interviews as soon as each was recorded was really helpful,” says Emma. “This way, The Frameworks team could highlight sections that were vital to each set.”

Emma also streamlined her strategy to deliver cuts in record time. “We also decided to share a content edit of the cut – without any B-roll or graphics – as soon as we had it ready,” says Emma. “This isn’t something we usually do, as we prefer the first cut to be more ‘complete’, but this meant fresh eyes and early feedback on the story and structure, before time was spent adding in the B-roll, graphics, and flair.”

With many balls in the air, so to speak, the whole team had to prioritise agility to reach the goal.

“An added time pressure was the various cutdowns and subtitled versions of the videos that we needed to supply with the main edit,” says Emma. “So we devised a system to split those versions out into different project files and have multiple edits undergoing work simultaneously. With everyone operating from separate locations, away from our central edit suites and servers, it was a big logistical challenge, but we made it work!”

‍Phase four: End of campaign
While we were all hands on deck developing the video content, there was a second stream of work under way. We produced an entire suite of supporting content, including “cheat sheets” to help IBM sellers start conversations with potential clients, as well as an internal campaign, including an animation and spot-the-difference-style game to get IBMers excited about this year’s incarnation of Wimbledon.

Tight organisation and planning helped us stay on track, but really it was pluck and determination of the team that got us over the line. “Whole-team status updates every morning were essential,” says Account Director Daisy Lockheart. “The fantastic responsiveness of the IBM and AELTC teams made it possible to work in an agile and time-efficient way. The whole process worked because of a mutual understanding that the campaign this year was as important as ever.”

To see our campaign go live and enjoy the buzz of The Greatest Championships is something we’re all really proud of. And, although the two weeks – of both the production and the campaign itself – went in a flash, it’s hard to forget our Wimbledon experience in 2020. Here’s to next year, whatever form it may take!